This is the second post in the Winslow Culottes hack series I am hosting this month. Earlier this week, I shared a simple elastic waist version of this pattern that is getting a ton of wear. Today I have a similar hack to share with a subtle detail, adjusting the rise.

You can grab the Winslow Culottes for 15% off using the code hackwinslow until the end of May, 2018.

The Winslow Culottes have a low crotch to help create a skirt illusion with those big box pleats. For the elastic waisted version, we have taken some width off of the sides (see the full tutorial for this here) and the crotch can be more noticeably low. Today we will adjust the rise to shorten the depth of that crotch curve. I recommend shortening it 0.5″ – 1.5″. I shortened mine 1.5″ for this version and took 4″ off the sides as opposed to the 3″ that I did on the pink version. It is a subtle difference and I really like both versions. The blue ones fit just a bit better with this rise adjustment.

To adjust the rise, we first need to cut the front and back culotte pieces horizontally. Aim for the middle of the crotch curve when you cut.

This simple hack can make a big difference! I love the higher crotch curve on this version and would do it again on future elastic waist hacks of this pattern.

Next up in this series, we have a wrap pant hack! I am having so much fun creating these hack versions and I hope you consider making some of them, too.

You can grab the Winslow Culottes for 15% off using the code hackwinslow until the end of May, 2018! 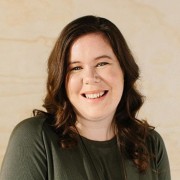 Helen Wilkinson is the designer and founder of Helen's Closet Patterns. She also co-hosts the Love to Sew Podcast! Helen is obsessed with all things sewing and strives to share her passion and knowledge with the sewing community.

All new newsletter subscribers get a special gift from us!
The Costa Tote showcases the quality design and instruction you can expect from Helen's Closet Patterns.